Lewis Edwards is the Registered Manager of the Pines, a small home for three people with learning disabilities and autism near Redruth in Cornwall.  Lewis joined Green Light in 2016 from the hospitality sector, with no previous experience of learning disabilities, autism or epilepsy.  He has spent the last six years, making up time, learning a great deal about these conditions, how they impact on people, and the kind of care and support people need to live fulfilling lives.

“As a Key Worker I had the opportunity to spend a lot of time supporting an individual with complex epilepsy.  I quickly learnt that epilepsy didn’t have to be a barrier to achievements and that with the right support and attitude the opportunities are as vast for those with epilepsy, as they are for anyone else.”

Lewis started running as the Covid 19 pandemic began, as a hobby and a way to stay fit and well, initially doing ‘Couch to 5k’, before going on to enter his first half marathon seven months later. 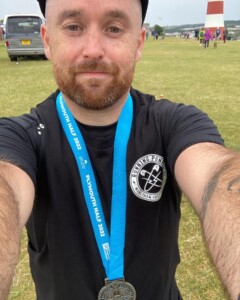 Lewis at the Plymouth Half Marathon in June 2022

Lewis is raising money for a cause close to his heart; the Epilepsy Society, the UK’s National Epilepsy Charity who conduct research and diagnose and treat thousands of people with epilepsy every year.

If you would like to donate you can do so here

“Donating through JustGiving is simple, fast and totally secure. Your details are safe with JustGiving – they’ll never sell them on or send unwanted emails. Once you donate, they’ll send your money directly to the charity. So it’s the most efficient way to donate – saving time and cutting costs for the charity.”