Mollie Salter-Prescott is a member of Green Light’s PBS team, working with a number of individuals with learning disabilities who are supported by Green Light.  In this guest blog Mollie explains how she and one the Green Light teams she is working closely with were able to help someone access healthcare that others take for granted.

This week, one of our teams supported someone to accept their covid-19 vaccine. The appointment itself was a breeze. To any onlooker, it looked like a routine appointment. You would never have known that the person receiving the injection had been afraid of needles for 30 years and previously required general anaesthetic to access the healthcare they need. All the hard work happened behind the scenes in the weeks leading up to this day.

For 18 months, this person’s team has been working on teaching him functional communication skills. Functional communication training (FCT) is a teaching process where people with limited communication skills can be taught functional and meaningful ways of communicating, often to replace the need for challenging behaviour. Using this process, this gentleman’s team was able to ensure that he had a clear way to communicate “yes” and “no” and that he knew his wishes would always be respected.  This was a crucial part of the vaccination process, as it meant he was able to stop the whole process at any point, if he wanted to do so.

The next step was identifying a set of reinforcers. In the world of behaviour analysis, we use the term reinforcers to mean actions, items or activities that increase the future likelihood of whatever response preceded them. For example, when I achieve something at work and my boss praises me, the praise makes me want to work harder to achieve more things, so that I am able to receive more praise.

Reinforcers are very individual.  Everyone has different reinforcers for different behaviours. That same praise from my boss might make me work harder, but it’s not going to make me run a marathon. I would need a much more valuable reinforcer for that behaviour! For the individual receiving the vaccine, I used reinforcer assessments to discover what items and activities he, as an individual, found personally reinforcing.  Through this, I found that a favourite food and a favourite film worked very well for him.  Knowing this, I was able to pair or associate myself with these reinforcers.

In applied behaviour analysis, pairing is the process of delivering a reinforcer alongside something neutral. By providing lots of praise with our chocolate cake and a favourite film we were able to establish my praise as an extra reinforcer for this individual.

After establishing a foundation of a good rapport, clear communication and understanding of personalised reinforcers, we were ready to start preparing for the vaccination itself. For this, we used a process from applied behaviour analysis called desensitisation. This involves acclimatising the person to each step that leads up to the thing that we know causes them fear or distress. In the past, this fear and distress has become a barrier to the person accessing much-needed healthcare, so something they really needed to overcome.  In the process of desensitisation the person is supported each step of the way, until they are able to accept what they are exposed to without fear or distress.  In this case, the process involved supporting the person to learn to tolerate being touched on the upper arm vaccine site. We then worked on building their tolerance of many more steps, to the point that they could readily accept having a replica syringe held against their arm for 10 seconds.  Although the vaccination itself would take less than 2 seconds, we wanted to make sure that the person was able to cope with a longer period and cope with any delays, rather than become distressed by them if they happened on the day.

The final stage of the desensitisation process was to create a clear signal to the person, so they knew what was expected of them when and when reinforcers would be available to them.  We created a visual sequence the individual understood that showed a picture of an injection being given followed by favourite food with a favourite film. We then used this visual sequence during desensitisation, so the person knew that seeing this picture meant sitting still while a syringe was pressed against their arm, and that this would be followed by their favourite food and film. 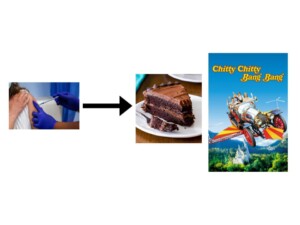 In applied behaviour analysis, we refer to this as a discriminative stimulus. It refers to something in the environment that allows people to discriminate whether or not reinforcement is available. For example, if I see my favourite tea bags in the cupboard, I know that making a cup of tea is available to me. If I can’t see the tea bags, I know that tea is not available and it’s not worth the effort of boiling the kettle.

On the day of the vaccine, the doctor arrived and was reintroduced to the person.  The person receiving the vaccine was asked whether it was okay for the doctor to sit beside him. Gaining his consent at this very early stage showed him that his communication would be respected by the doctor and throughout the process, as it had been in our practice runs.

We then showed him the picture sequence and told him there would be an injection, followed by his favourite food and film. We then asked if this was okay with him, once again showing him that his communication would be respected.

The individual indicated their consent to the vaccine, accepted this without fear, and in under 10 seconds was eating his favourite food while watching his favourite film. He paused to shake the doctor’s hand, smiled and waved as the doctor left. The rest of the day was filled with praise, smiles and laughter.

I am incredibly proud of what this person achieved with their team’s support this week, and in all the weeks leading up to this, and even prouder that he spent the rest of the day smiling. Previous attempts at receiving injections and other healthcare have caused significant distress.

It just goes to show how empowering the science of applied behaviour analysis, combined with good person centred practice can be.