Support Worker Liam joined Green Light during the pandemic in July 2021.  He is the organiser of the IDAHOBIT and Pride Celebration Day being held at Green Light’s home Tresleigh House in Grampound Road on 17th May 2022.  In this blog Liam explains why he’s organised the event and the meaning behind IDAHOBIT and Pride.

I approached our management team about holding a party on the 17th May to mark International Day Against Homophobia, Biphobia, Intersexism and Transphobia (IDAHOBIT) and Pride.

This event is all about raising awareness and to recognise that things have not always been easy for the LGBTQ+ community.

As a openly gay man I am proud of who I am and that people know who I am.  I have had the support of friends and family to show me that it’s ok to be, well, me!

I have been blown away by the response of my colleagues at Green Light.  Everyone has been so inclusive and willing to help with this important event.

How did Pride begin?

Not many people know but Pride actually started as a riot in New York City in 1969. This was known as the stonewall protest and later as The Stonewall Riots.  These began on the 28th of June 1969 when the LGBTQ+ customers of New York City’s Stonewall Inn resisted police raids on their bar.  One of the main activists was a trans woman by the name of Marsha P Johnston. Sadly Marsha was murdered in 1994 for being ‘too outspoken’ about in inequalities and pushing forward the movement.  It was not until the 28th of June 1970 that the first official Pride took place.  The purpose of the protest was to protest the treatment of gay people.  Although LGBTQ+ people have many rights and equalities today, there is still much to do to raise awareness and prevent inequalities in 2022.

More than a third of LGBTQ+ adults identify as having a disability.  It is especially important in our profession, that we recognise that people with a learning disability can be lesbian, gay, bisexual and transgender (LGBTQ+) just like anyone else can be.

Actor, singer and author Chris Colfer once said “There is nothing wrong with you.  There is a lot wrong with the world you live in” 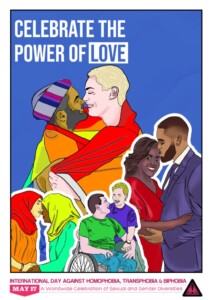 IDAHOBIT day was established in 2004.  It is a day to call out human rights violations that we keep facing every day, but also a moment of global pride. So today as we celebrate IDAHOBIT day not only is it to raise awareness in this country but is to show solidarity with LGBTQ+ people all round the world and to promote positive change.

130 countries around the world will be recognising and celebrating the 17th of May.  You do not have to be LGBTQ+ to join the celebrations.  You could be a straight ally who supports LGBTQ+ rights and equality.  Homophobic attacks have almost doubled in 3 years.  These events help to educate people about homophobia in the UK.

I would like to thank all my colleagues at Green Light for supporting this event and supporting our message; homophobia, biphobia, intersexism and transphobia have no place in this world.  By standing together, we show we are inclusive, while we are heard, seen, and most of all while we have fun together.

Finally, I would also like to thank my friends at The Bodmin Jail Luxury Boutique Hotel and Waffles Coffee shop in Bodmin who have very generously donated special prizes for the winner and runner up of an LGBT+ awareness quiz I have put together for 17th of May celebrations at Tresleigh.

Look forward to seeing everyone on the day!