Let’s make the A30 Suicide Safe

We all have times in our lives where we see something or meet someone that makes us stop and think, possibly reassess our preconceptions or even make us look at things in an entirely different way, for me that moment was seeing a tweet from someone called Beth Matthews! Beth’s tweet made me stop just long enough to think, the more thought the more I read and the more I realised that Beth is a survivor; not just any survivor but, a major trauma, spinal cord, ICU and Suicide Survivor, for on the 23 march 2019 Beth Matthews fell 50ft from a bridge over the A30 near Launceston. 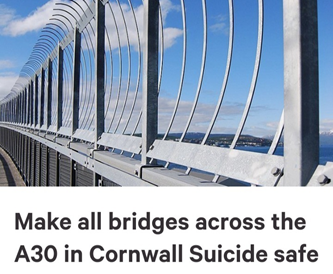 Fast forward to 07 September 2021, I’m on my way home from work and I see the eerie blue of flashing lights in the distance, followed by a police roadblock preventing access to a road below the A30.  As is human, my mind jumped to an immediate conclusion; that it’s an RTA. Only when I get home do I read about the second tragic loss of a human life in less than a week, I don’t mind saying that that night I went to bed feeling a little numb.

Still feeling numb in the morning, I decided to conduct a little research. ONS statistics told me there had been 56 suicides in Cornwall during 2019 and 75 in 2020! I wondered how many of these involved the A30 directly but driving along it regularly, you can’t help but notice the flowers on the bridges to remember someone or something. It was after seeing such flowers that I decided I needed to try and make a change. Luckily for me I know of a campaign ‘up country’ that’s trying to make a local stretch of motorway suicide safe, so here I am trying to create the same campaign for Cornwall and I’m asking for your support. 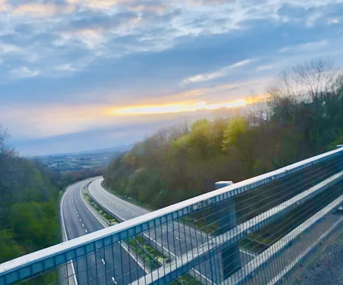 Suicide rates are the highest they have been in the county, more and more pressure is being put on our NHS and Mental Health Support services.  Sadly they are struggling to cope.  Longer waiting times and stretched services mean support is not being readily available and our most vulnerable are being turned away.  Physical suicide intervention is a simple way of making our society Suicide Safe which involves the addition of safety caging, netting or anti climb walls fitted to existing bridges and structures. My aim is to start with bridges on and across the A30 and then on to other major A roads in the county.

If you wish to support this campaign can I please ask you to sign and share the petition to raise awareness of this campaign. Let’s make change happen by putting Cornwall at the forefront of Suicide Prevention.