In Summer 2019, after a lot of training with his team, Hugo climbed to the summit of Mount Snowdon with Beccy Melling and Ashley Crocker.  After this amazing achievement, Hugo set himself another goal; to climb Scafell Pike in the Lake District, Cumbria, the second of the three peak challenge. Scafell Pike is the highest and the most prominent mountain in England rising 978 metres above sea level.

Although plans were delayed by the events of the last two years, on July 10th 2022, Hugo was back on track, setting off with Ashley Crocker and Samu Taukei to achieve his goal.  Together they travelled just over 400 miles from Hugo’s home in the little coastal village of Holywell Bay near Newquay.

Hugo left Newquay just after his Sunday morning breakfast, trying to cover as much ground as possible before making a first stop in Taunton for a quick bite of lunch.  Hugo enjoyed singing along to his favourite radio stations; Pirate FM, Planet Rock and KISS as he went.   8 hours later Hugo, Ash and Samu arrived safely in The Lakes, soaking up the incredible mountains, valley and lake land scenery.  They picked up some provisions from a local grocery store, checked into their Airbnb to rest before the epic climb to come the following day. 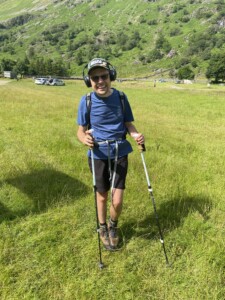 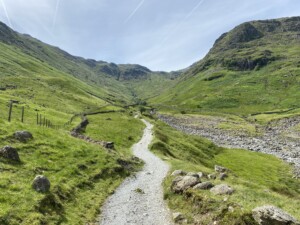 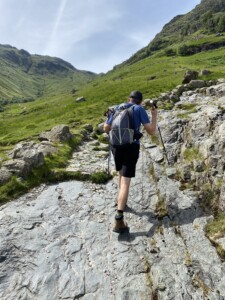 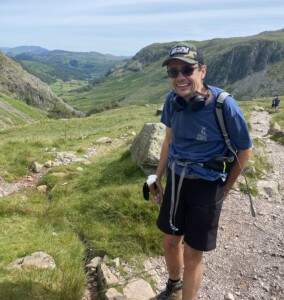 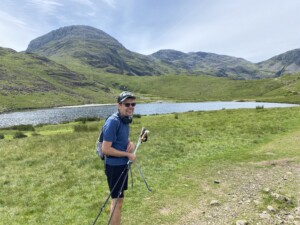 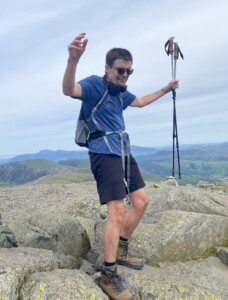 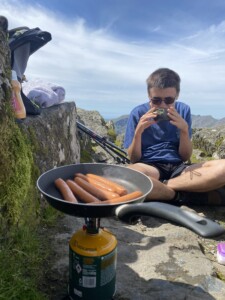 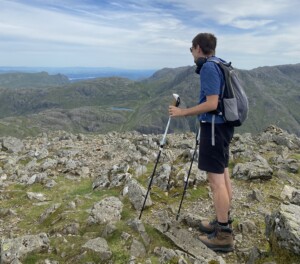 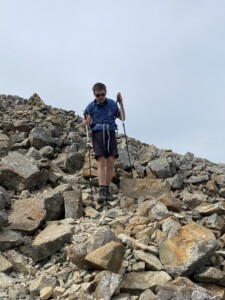 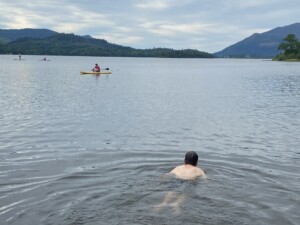 On the day of the climb, July 11th Hugo embarked on his epic journey to the top of Scafell Pike.  The conditions were perfect for the climb; with the sun shining, a 24 degree temperature and a gentle breeze.  Hugo was up early fuelling up, preparing his backpack, music and Nordic walking sticks before making his way up to Seathwaite, Borrowdale (Corridor Route), one of the most impressive routes in the entire Lake District ‘a must do’ for any hill-walker!  Along the way, Hugo admired the beautiful valley and the streams running down the mountainside.  After a first bit of climbing Hugo took a break where he was able to take a quick drink and splash some fresh spring water onto his face and head to cool him off, before continuing his climb to the second marker, a Stretcher Station, a halfway point for all routes.

Here the second climb began and the terrain started to get tougher.  Hugo rose to the challenge using his sticks as he bravely marched on.  Hugo listened well to guidance, approaching every obstacle with care; telling himself “Hugo, be brave” which was amazing and quite moving and inspiring to hear.  Hugo made it to his last stop for a break, some sweets to boost his energy levels and a drink to stay hydrated, ready for the final climb.

At the third and final ascent and Hugo tightened his bag strips, put on his music and went for the final climb of about 170 metres to the summit.  At this point the terrain became very challenging due to large amounts of loose rocks and the paths becoming harder to find.  At some points Hugo just made his own path, the most direct route he could find to the top. Finally, after just over 2 hours, Hugo made it to the top to touch the pillar sitting at the top of Scafell.

As Hugo soaked in the view from the highest point of England he was so proud of himself for being able to complete one of his goals; his second Peak Challenge.  Hugo made himself a cup of tea from the camp stove and enjoyed a hotdog lunch, spending about 45 minutes at the top, before setting off back down the mountain.

The descent was just as hard and challenging as the ascent but as always, Hugo took it on like any other challenge, overcoming his fear of heights to make it back to the car.

In total, Hugo completed the hike in just under 6 hours, an amazing amazing achievement for anyone.  Once again Hugo proves the sky’s the limit!

On our way back to the Airbnb, we pulled over to Lake Keswick for a little swim in the lake to cool off, and for a chance for Hugo to cool his toes after his 6 hour hike. It was a well earned swim and Hugo appeared to enjoy every second of it.

That evening we enjoyed triple Stacked Cheeseburgers for dinner at the local pub before making our way back to the Airbnb where Hugo was happy to relax and watch some of his favourite tv shows before bed.

On the 12th July 2022, our last day in the Lake District Hugo helped  pack up the car and head over to the Wesdale Head, another route, where he picked up some souvenirs, a medal and a shirt to commemorate his hike.  We drove through a mountain passes called the Hardknott Pass and through the mountains enjoying the best of Cumbria before making our way South West to Cornwall again.  After 8 hours and a total of 936 miles Hugo was happy to be home again.  We are all so proud of what Hugo achieved in only 48 hours and what we as a team have been able to achieve together supporting Hugo with his goals.   Thank you to the whole team and to Hugo’s family for supporting him.  Only one more to conquer for Hugo; Ben Nevis! 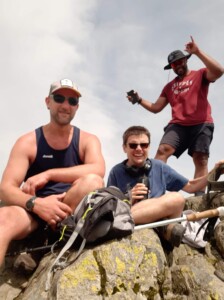 See you in Scotland soon!

After receiving a version of this blog, Hugo’s parents Pat and Jill wrote to Green Light’s Managing Director Jo Pyrah to say:

I am sure you have heard all about Hugo’s expedition to the Lake District to climb Scafell. It was a huge success and Hugo managed the challenge with the support of Ash and Samu.  He quite plainly was very proud of himself, which is a very rare emotion for Hugo to experience.  We too are very proud of him as this climb is challenging and very hard work.  We were sent a lovely report and photos of the whole trip, which we really appreciated.  The pictures have been sent all over the world and family and friends were thrilled and surprised at his achievement.

Samu and Ash meticulously planned every step of the way, and it all appears to have worked seamlessly.  The drive, accommodation, meals, climb all went to plan.  They even carried a small camping cooker up the mountain and had fried sausages for lunch!

None of this would have been possible if Hugo had not trained, running up sand dunes, cycling, long cliff walks, swimming etc.  He is obviously extremely fit and strong and is a credit to the input from the team at Bigwig, led by Chris.

We are extremely grateful to all who support Hugo at Bigwig, It has been a very tough time with Covid, but they managed to keep the people safe and happy.  The house is very well run and the staff excellent.